Many teen girls want to become a young actress on the big stage. Actresses such as Millie Bobby Brown and Maisie Williams started at a young age and became very successful as they grew older. While not all young actresses are going to be as successful as somebody like Sophie Turner or Zendaya, acting can still be a good hobby for teen girls.

How to Become a Young Actress

If you've decided you want to get into acting, you'll have to go through several steps before becoming a celebrity or award-winning actress. CEO and Co-Founder of AGENT, Inc., Mark Willingham, offers his tips and advice from a background in model management and branding to help you get your acting career started.

Step One: Consider Your Motivation and Goals

Think about why you want to become an actress. Is it for fame and money, or because you truly respect and love this art form? Do you want to be a on Broadway, the Disney Channel, in movies? Those who aren't passionate and focused about this job typically aren't very successful. Mark emphasizes the importance of taking this process seriously in his advice to "Make sure you understand the time commitment that is required to seriously pursue an acting career. Take into consideration life balance when it comes to acting, school, friends and family time."

"The first step across the board for becoming a young actress? Headshots," says Mark. He explains that your headshot as an aspiring actress is most often the first thing that will get an agent or client's attention. It speaks volumes about your personality and versatility. Tips for modeling in headshots are:

You can have headshots taken at a local photography studio, but Mark suggests researching to make sure the photographer is both experienced and reputable. 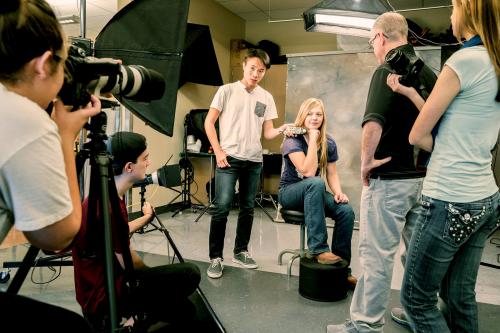 "Acting classes are a great way to gain raw experience without booking jobs," says Mark, and they are available for all types of acting from theatrical to on-camera in traditional or summer camp formats. His pro tip is to audit as many classes as you'd like first, then choose the ones that feel right to you.

Acting classes can be expensive, but Mark says "They're worth it so teens can gain some experience and learn the ropes before going out into the real world."

Mark suggests aspiring actress keep their portfolios updated because clients and agents "normally expect to see samples of work like acting reels, plays, clips, etc." He advises keeping these items and your headshots on hand at all times to show "professionalism, preparedness, and what you are capable of." Clients and agents will want to work with you because of your acting abilities and your attitude, so be prepared to present your best self at all times. Keep in mind that agents and clients will sign you because they see something special in you.

When it comes to pursuing an acting or talent agent, Mark "always recommends getting a referral." This involves thorough online research for any agents you are considering. Look to see if they have more complaints or positive reviews, if their website seems professional, and if they have an overall good reputation and track record. The process of finding or landing an agent can look different for each individual.

Step Six: Choose an Agent if You Want One

After you've done your homework and met with desired agents, you'll need to decide if hiring an agent is the right move for your career.

Mark suggests the ultimate way to choose an agent is to pick one who is not only reputable, but "is excited and eager to sign you. You want to make sure this person will really go to bat for you and believes in your raw talent." If the agent doesn't have these attributes, they're not going to work as hard to land you work.

One of the most common ways for a teenager to become a young actress is through auditioning for television commercials and small roles, such as an extra, in movies. As you gain experience, you'll get more opportunities to audition for larger roles. When going on auditions or casting calls: 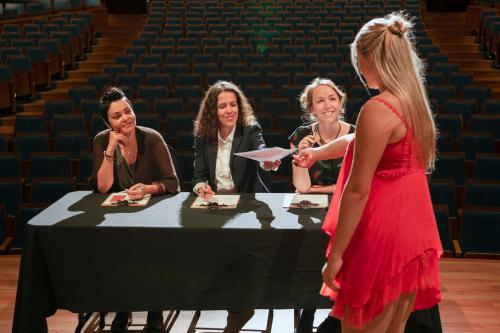 While many aspects of becoming a teen actress cost nothing at all, there are general expenses as with any other hobby, extra-curricular activity, or career training.

Mark shares that "Wages will vary depending on the level of experience you have and the type of job your're landing," so keep that in mind when spending money on photos, classes, travel, and other expenses.

In general, teens under the age of 18 are not legally allowed to enter into contracts on their own, so parents play a huge role in a teen's desires to become a young actress. According to Mark, "Parents should be involved in all aspects of a child's pursuit in acting" because safety should be of utmost concern to you.

Mark warns that "The industry is filled with powerful people, some of which may not have the best of intentions, who know that there are young people out there willing to do anything to make their dreams come true."

Becoming a young actress involves a lot of forethought and work. For many teen girls, acting and modeling follow similar paths that may intersect, so be open to opportunities that can further the career of your dreams. Thing about your own talents, skills, and ultimate goals then build a team of trustworthy adults who can help you on your career path.

32
Comments
© 2006-2020 LoveToKnow, Corp., except where otherwise noted. All Rights Reserved.
How to Become a Young Actress