Peer pressure isn't all bad. At times, it can be good. While many of us know the negative effects of peer pressure, you might be surprised to hear about the positive ones. Learn how the different types of peer pressure can affect your teen in school and family life.

Peer pressure is constantly a worry in parents' minds. You see it on TV. Maybe, you read an article discussing the latest incident at school. But is peer pressure all that bad? According to Carrie Silver-Stock, licensed clinical social worker, founder of Girls with Dreams and writer of the books Secrets Girls Keep: What Girls Hide (& Why) and How to Break the Stress of Silence, it can be. Carrie stated, "negative peer pressure can be detrimental to self-esteem, influence clear decision-making, and increase stress. In the worst cases, it can lead to harmful or dangerous behaviors that could result in death, such as car accidents involving alcohol, accidents, drug overdose, and more."

While negative peer pressure gets way more news time, it isn't the only peer pressure that affects teens. Teens that surround themselves with positive people can also see the effects. "When teens surround themselves with people who are making good decisions and who are involved with positive activities and choices, this typically makes teens want to be better. Having positive friends increases confidence and self-esteem. If this peer pressure happens at school, it could improve a teen's grades or even friends," as reported by Carrie.

Much like those that surround themselves with negative influences, if you surround yourself with positive influences, you can see a change in your academic performance. Carrie notes that teens could see:

Gender can bring about some fundamental differences. For example, it might affect how teens are affected by peer pressure. Carrie illustrated that "boys and girls might feel pressure for different things. For example, a guy might be pressured to race his car, or a girl might feel pressure to dress a certain way." However, peer pressure is also universal. Carrie said, "the effects are very similar for boys and girls. It's difficult to deal with pressure because everyone wants to fit in and be liked, boys and girls. Both can have negative and positive consequences depending on how they choose to react." 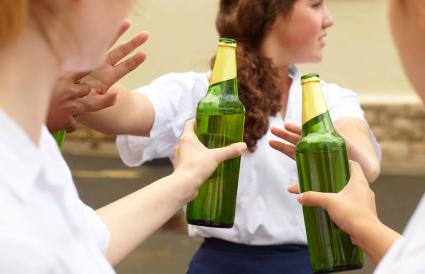 One of the most common sources of peer pressure comes from friends. The way that this affects teens can vary. "Teens might feel cool for having a group care about them, or they might be worried or confused about how to make their friends happy while making a different choice. Teens might also feel like they won't fit in or be liked if they don't go with the crowd. Teens can also feel insecure about their beliefs or ideas," said Carrie.

Resisting peer pressure can be hard for teens as well. Even, Carrie said, "it's usually not easy." She goes point out how it can affect teens. "In some instances, friends will have more respect for the teen and leave him/her alone. Other times, it can initially be very stressful, and friends might continue to pressure the teenager. However, once a teen gets over the initial shock and reaction, it will eventually boost self-confidence to its highest levels."

When a teen gives in to negative peer pressure it can have some pretty hefty consequences. "Whenever teens do not listen to their instincts and internal guide and only do what their friends say," this can cause a problem explained Carrie. She goes on to further clarify, "this is the warning sign teens need to pay attention to, and from here the consequences only get worse. Another clue that things are getting out of control is if the teen is doing something illegal or getting into trouble at school. Other severe consequences might include:

Not only can peer pressure have short-term impacts on school and family, but the consequences of these effects can be long term. For example, teens might have a hard time as an adult getting a job because of poor academic performance. Relationships with family members can be ruined. Additionally, statistics on peer pressure from the Society for Research on Child Development found that teens that don't establish autonomy and independence from peers were at a higher risk for abusing drugs and alcohol along with illegal behavior after 10 years.

How Parents Can Help

If you know that your teen is having a hard time with peer pressure there are several things that you can do to help the situation. Carrie states that you can:

Teen peer pressure can be good or bad, depending on the intentions of the teens themselves. One thing is certain, peer pressure in this age group isn't going to just go away, so it's best not to ignore the issues that surround it.