High school basketball rules have many points in their regulations that turn the game into an educational experience as well as an athletic competition. High school basketball's emphasis is on learning to work together as a team, but it can also be a teen's chance to get noticed by college and professional scouts.

The National Federation of State High School Associations (NFHS) is the national organization that oversees high school sports. Their rules, which are updated annually, set the standard for competitive high school basketball and are available on Amazon in ebook format for about $7. High school basketball rules differ from college and NBA play in many ways.

A timeout is a break in the game that stops the clock for a brief period so teams can substitute players, strategize, or give players a quick rest.

A defensive player establishes a legal guarding position when he has both feet on the ground and is facing an offensive player. Legal position may be established anywhere on the court in high school. In college and the NBA, the exception is that a secondary defender can't get an initial legal-guarding position in a restricted area of four feet under the basket in an attempt to draw an offensive foul.

A technical foul is called when a player, team, or coach commits an act of unsportsmanlike conduct or a foul that does not involve physical contact between players on the court. 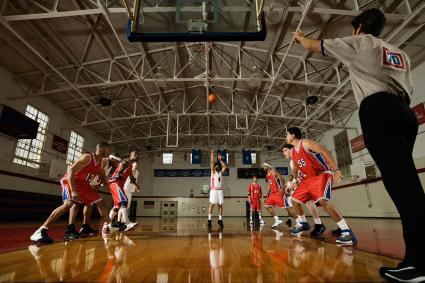 To be closely guarded, a defender must be within 6 feet of the offensive player. During a high school game, closely guarding is called if a player is holding or dribbling at the frontcourt at the six foot distance. College ball has the same rule, but it's only for holding, not dribbling.

Post play describes the act of an offensive player handling the ball with her back to the basket. High school players cannot use an extended arm bar during post play. College players are allowed to use their forearm.

A jump ball is when an official throws the ball up in the air to start or restart play and two opposing players then attempt to gain control of the ball. Any re-jump in high school has to be by the players who were involved before establishing team control. In college, any two players can do the re-jump.

High school players and college men are allowed to keep one foot in the lane if the other foot is in the air to avoid a three-second violation. In women's college ball, both feet must be on the court outside the free-throw lane.

Starting from the backcourt, with time starting when a player has control of the ball, the team has ten seconds to get over the mid-court line. In college ball, the count starts on the legal touch of a thrown-in ball.

In high school basketball, coaches can be issued administrative warnings for a variety of minor infractions including entering the court without permission, disrespectfully addressing an official, standing on the team bench, or violating the coach-box rule. In college, the only administrative warning given is to the head coach for being outside the coach-box or specific delay-of-game tactics.

Players are issued standard shorts with a jersey depicting their team colors that must be worn during all competitive games. 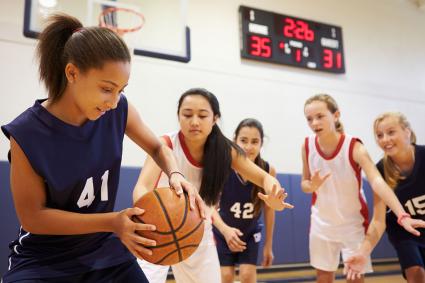 Good sportsmanship and respect for the rules are taken seriously at all levels of basketball.

When governing organizations review their regulations and any issues that occurred, they often find ways to clarify rules, update them, or change them altogether.

The National Collegiate Athletic Association (NCAA) oversees college basketball regulations while the NBA has its own rule book. High school basketball rules differ from college and NBA play in the following areas:

Get In the Game

The first step to becoming a great high school basketball player is learning the rules. Each player is responsible for understanding the game and working within the rules help their team win.