Most middle and high schools have a dress code governing what students can and cannot wear. According to the National Center for Education Statistics, about 15 percent of America's high/combined schools have strict dress codes requiring school uniforms; however, other schools still have many rules and regulations for appropriate clothing.

Many dress codes call for clothing teens wear to school to be reasonably modest, meaning clothes cover the body well, and decent. Guidelines surrounding modesty seek to minimize distraction and improve the safety of students, but are often open to interpretation based on personal values.

Many schools define the appropriate length of skirts and shorts by the "fingertip rule." For example, the Socorro Independent School District states, "The length of skirts, skorts, and shorts must extend below the student's fingertips when the student's arms are extended at his/her sides." While many districts don't distinguish between boy and girl guidelines, some do have separate sections for boys and girls. The shorts regulation, however, is the same for both: "Shorts for boys and girls...must be knee-length and be worn above the hips."

Spaghetti straps, strapless tops, muscle shirts, off-shoulder shirts, and tank tops are not allowed in many school guidelines, particularly when they expose the entire shoulder or bra strap for girls and nipples or abdominal sides for boys. Chehalis Middle School in Washington State doesn't allow tops that have less than "two fingers width of coverage on the shoulders" for any student, while NCCSC further stipulates shirts that are cut like "A-style under shirts or beach wear" can't be worn by boys.

Many schools require Spandex leggings, or yoga pants, to be worn under skirts, long tops, or other clothing that covers the bottom and genital region. Warren Central School states in their dress code that "tights, leggings, or other types of hosiery must be accompanied by a fingertip length or longer top or dress."

Pajamas are often allowed for spirit days at school, but tend to be discouraged otherwise because they violate other dress code rules like no wearing of baggy clothes or tank tops. Southern High School lumps pajama pants in with other types of bottoms that may show skin through the fabric when excluding them from acceptable attire. Coast High School includes pajamas in the category of provocative clothing.

Schools generally do not allow vulgar or obscene words or graphics on clothing. California's Edison High School defines vulgarity as apparel that "depict sexually suggestive expressions or actions, profanity, obscenity, drugs, alcohol, or tobacco, or which degrade the integrity of individual groups."

Bare midriffs are often not allowed for boys wearing shirts cut off at the sides or girls wearing crop tops. Salinas High School says "all parts of stomach and back must be fully covered without pulling or tugging."

Bra straps under tank tops, underwear beneath baggy pants, or even undergarments showing through rips and holes in clothing are prohibited. The Oregon NOW Model Student Dress Code is meant to be modernized and inclusive, but prohibits visible underwear with the distinction that undergarment waistbands and straps showing are not a violation.

Necklines must be modest. Many schools prohibit necklines that can expose cleavage or too much of the chest. For example, Carlisle School bans any tops that display cleavage on campus at any time.

School dress codes geared towards safety focus on a few areas including gang activity, theft, violence, and physical safety. They seek to eliminate clothing under which students can hide weapons as well as clothes that may make students more accident-prone. Some apparel is also banned because it may cause damage to school property. These may include items such as spiked jewelry and wallet chains.

These items may include specific colors, head coverings like a do rag, jewelry, emblems, or graffiti of any kind. James Logan High School prohibits any gang-related clothing on school property or at school-sponsored events. Since gang identification will vary regionally, the specific codes will be different depending on gang activity in the area.

This might include heavy coats, trench coats, or baggy clothing of any kind and is meant to help schools prevent students from hiding weapons. Thompson Middle School says students can't wear "extremely baggy" clothing and must keep all outerwear, including coats and zipped-hood sweatshirts, in their lockers during the school day. 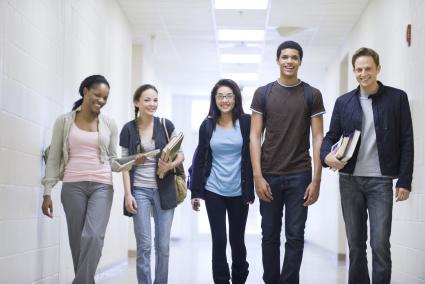 Tuck in Those Shirts

Not all schools require shirts to be tucked in, but some do. Shirts must be tucked in at the waist for students in all grades at schools like The Saint Lucie County School District. This guideline is viewed as a more professional look and sometimes seeks to prevent concealed weapons in the waistband of pants and skirts.

While the definition of appropriate footwear varies, common banned shoes include anything without a back strap or that poses a falling risk. For example, a school may not allow flip flops, platform shoes, or shoes with wheels for safety reasons like the ability to respond appropriately during fire alarms or other emergencies.

Some apparel isn't allowed in school because it is considered a distraction from the education process.

This often includes hats, scarves, and visors, but would not include head coverings worn for religions reasons. Districts such as the Martinez School District don't allow hats indoors as part of their dress code, but they are legally obligated to allow students to wear hats during outdoor activities for sun protection.

Sunglasses can interrupt the learning process because if may be difficult for the student to see indoors and for the teacher to ensure the student is paying attention. Voorhees High School does not allow students to wear sunglasses unless prescribed by a doctor for a legitimate reason.

Many schools prohibit visible facial or body piercings and gauging, except for pierced ears. Some ditricts feel extreme body piercings may cause a distraction or threaten student safety, so they are not allowed.

Regardless of how you personally feel about school dress codes, students who consistently break them may be subject to disciplinary processes. Therefore, it's best to know your school's dress code before the school year begins.