Teens will most likely run into peer pressure to try a cigarette at some point in their lives. What can parents do to ensure their teen resists the pressure to smoke? If their teen is already smoking, how can parents get the teen to stop? Parents can arm themselves with knowledge and have intelligent conversations with their teen before they get pressured to try their first cigarette. If a teen decides to smoke, parents can talk to teens, using statistics and facts to help convince them to stop.

It's never too early to start talking to kids about smoking. Parents should have a conversation about the risks of smoking as early as 5 or 6 years old, according to The American Lung Association. A study cited by The Campaign For Tobacco Free Kids state 95 percent of all adult smokers begin smoking before they turn 21 years old.

Another study done by the World Health Organization on teens ages 13 to 15 years old on smoking rates states:

Sometimes the high school years can bring about new challenges for teens and they turn to smoking cigarettes to relieve stress, help them lose weight or change their image. Many teens overestimate the number of people who smoke. Among kids 12 to 15 years old, nonsmokers overestimate smoking by 50 percent while smokers in the same age cohort overestimate smoking by 130 percent. Parents who know the facts about how many kids actually smoke can use those facts to support the argument not to start smoking.

Smoking Statistics About Why Teens Smoke

According to the American Cancer Society, teens start smoking for two main reasons. First, because friends and/or parents smoke, and second because they think it's "cool" to smoke. According to the Mayo Clinic, many teens smoke for the following reasons:

The Centers for Disease Control lists the use of tobacco by parents, guardians, friends or siblings as a main reason teens start smoking, as well as the media. Also, teens typically haven't developed the foresight to understand the dangerous implications of smoking. Sometimes smoking is a teenager's way of feeling more in control of their life and a way to cope when they are lacking parental support or desire more parental involvement in their life. There is a comprehensive list of all Factors Associated with Youth Tobacco Use on their website.

Teens are easy targets for the tobacco industry. They are naturally at an impressionable age and more easily influenced by the media. The American Academy of Pediatrics conducted a study that noted high levels of susceptibility to the tobacco industry advertisement messages amongst young adolescents. Seven out of 10 middle schoolers and high schoolers have seen a tobacco-related advertisement. 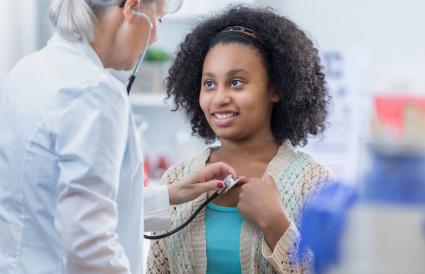 The health risks for smoking are great. Not only can smoking cut 10 years off a person's life, but smoking has been proven to be the cause of a wide a range of diseases and other health problems, including cancer, heart disease, and lung disease. In fact, 90 percent of all deaths from long-term lung diseases are directly related to smoking.

According to recent statistics, each day, 2,500 kids will try their first cigarette. Of those, about 400 will form a daily habit of smoking. Half of those teenagers will eventually die from smoking. The World Health Organization reports:

According to reports, people who start smoking at a younger age will develop a more severe addiction to nicotine than those who start at a later age. Adolescents who have smoked at least 100 cigarettes report that they would like to quit, but can't.

The bad news is quitting smoking is one of the hardest things a person can do. It doesn't matter how long a person has been smoking. A research study done by Suzanne Colby and C. Bidwell at Brown University discovered that teens who had only been smoking for a short period had just as much trouble quitting and experienced the same psychological effects when quitting as those who had been smoking for years.

To illustrate how hard it is to quit, the National Health Interview Survey done by the Centers for Disease Control, shows 68% of smokers would like to stop smoking, 55% of smokers tried to quit in the past year but couldn't, and only 7.4% of smokers were able to quit smoking successfully within the past year.

But here's the good news: Even though it is hard to quit, the benefits of quitting begin almost immediately.

The National Cancer Institute provides the following benefits of quitting:

Where to Get Help for Teen Smoking

Talking to teens about smoking can be a challenge, but it is a necessary conversation every parent should have with their kids. These are just a few statistics and studies you can use to inform your teenager of the hazards of smoking and the negative impact cigarettes will have on their life. Finally, if you know a teen who needs help quitting, tell them to call 1800-QUIT NOW (784-8669), and for additional resources about smoking go to CDC website.