In recent years, both concerned parents and teens themselves have wondered about the TV effect on teenagers. Some children find themselves being raised by a television, and there are many studies analyzing how this can affect an adolescent when growing up. Common Sense Media speculates that tweens and teens spend between 4-7 hours in front of a screen a day. One of the biggest resulting problems is the presence of negative influences from television programs.

TV Effect on Teenagers and Youth

When children are very young, the television already begins to have an influence on their life. Modern generations have grown up on shows like Sesame Street, Barney and Teletubbies. While many of these shows are educational and beneficial to development, when children grow up to be teenagers, and step out of the educational television arena, that is when TV potentially becomes a negative influence.

The negative influences of television can be found on many programs. Turn on the television and flip through the channels. There is a good chance that you may come across some of the following situations:

Each of these situations can affect teenagers differently. One 2016 study found across more than 300 episodes of seventeen shows rated Y7 to MA, each contained at least one risk behavior like violence, smoking, alcohol, and sex. In shows made for teens and rated TV14 over 50 percent contained violence and sex while almost 75 percent featured alcohol.

Sex on TV and Teens

Growing Up With Media in 2010 reported that media and sex do have a link. In the study of 14-21 year olds, those that viewed little sexual content were less likely to have sex (only 2%), while those that frequently watched sexual content about 60% reported sexual activity. However, current research in 2016 suggests studies like those from Growing Up With Media don't provide a view of the whole picture. Now researchers suggest kids and teens are better able to separate real life from fictional TV shows than previously thought so sexy shows don't have as much of an impact.

Many television shows portray drinking. While there are programs that show legal aged adults drinking, there are also many, such as 90210 or Gossip Girl, that show teens engaging in underage drinking. These shows often portray that drinking is the 'cool' thing to do. As a result, teens looking to fit in often turn to drinking. Additionally, according to a research report, the more alcohol ads teens see the more likely they are to consume alcohol.

One of the largest impacts of TVs effect on teenagers is violence. For example, a 2014 study of cartoons found watching violence can lead to nervousness, aggression and disobedience in kids. Reality TV like The Jersey Shore normalizes excessive drinking and engaging in violence. Plus, the level of violence and acts of aggression on TV for those 14 and up has increased monumentally. For example, Revolution, which is rated TV-14, shows acts of violence per episode that average out to every 39 seconds. 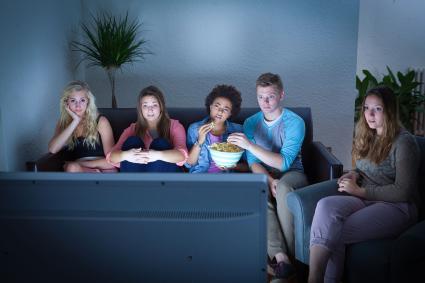 In 2015, PG-13 movies, which are frequently shown on television after theatrical release, featured over 2.5 instances of gun violence per hour without showing extensive scenes depicting the real consequences of these actions, giving teens altered views of reality.

Effect of TV Violence on Teens

When someone sees a lot of violence on television or in video games, it can desensitize them to real life violence. It can cause people to see violence as something that only happens on television and feel almost immune to it happening to them. The integration of violence into most shows can even result in teens thinking violence is appropriate in many situations.

Negative Impacts on Gender and Race

According to a study by Common Sense Media, TV depicts gender stereotypes of girls and boys where girls focus on appearance and boys engage in riskier behavior. This can be harmful when a teen confronts someone who doesn't conform to the norm (i.e. a boy that is more feminine or a girl that is more masculine), which can lead to teasing and bullying. Additionally, a study showed that prolonged TV exposure can lead to lower self-esteem in ethnic minorities due to their depictions within TV shows.

In TV land, the world is unrealistic, despite how realistic it might seem. This can cause teens to get an unrealistic view of the world. For example, Dr. Robin Nabi states that TV can broaden our world view and set unrealistic expectations. For example, Nabi found that depictions of glamourous living spaces in Manhattan on TV can lead to unrealistic expectations in teens that are apartment hunting. This can affect other areas, too, like if teens see drinking with little consequence, they may start to rationalize this as truth.

Overuse of television has also shown to have a negative affect on teens health. For instance, TV might lead to late nights and not enough sleep. Additionally, sedentary TV watching can help contribute to obesity. This might start in childhood but continues as you become a teen.

What Can Be Done?

Many parents and teens may be discouraged when reading about the effect that TV can have on teenagers. It may seem impossible to change the situation. However, there are a few things teens can do to make sure TV doesn't have a hold over them:

Put Screens in Their Place

Each teen is a unique individual and will be impacted by television shows and advertisements differently. Make smart choices about what you watch and how much time you spend watching to become part of the solution in limiting these negative impacts.