In this interview, Anne Fletcher, M.S., R.D. discusses how teenagers can lose weight and keep it off. If you've tried to lose weight, but hardly see the scale change or see it creep back up after reaching your goal, you are not alone. Many teenagers have been down the same weight loss road, however, many others have found a way to lose the weight and maintain it in a healthy, sensible way.

Anne Fletcher, M.S. is a medical/health journalist and registered dietitian who specializes in writing about weight management and addiction. She has written five books about individuals who have managed to lose weight and keep it off. Most recently, she wrote, Weight Loss Confidential: How Teens Lose Weight and Keep It Off - And What They Wish Parents Knew along with a companion book, Weight Loss Confidential Journal: Week-by-Week Success Strategies for Teens from Teens. Weight Loss Confidential is about more than 100 formerly overweight teens who lost weight in healthy ways and kept it off for about a year or more. 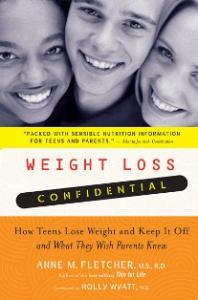 The following are a few of the success stories from Anne's books:

Motivation to Lose the Weight

What motivates a teenager to lose weight in a healthy way?

For most of the teens in Weight Loss Confidential, it was a combination of things: they wanted to look better and feel better about themselves; they were concerned about their health; and they wanted to have better relationships with their peers. Many of them were sick of the teasing they experienced because of their weight.

What are the benefits of being at a healthy weight?

As nice as they can be, changes on the scale and in clothing size were not the only benefits the Weight Loss Confidential teens described. They talked about improved physical fitness and health. Sandra D. said, "Notice that you can do more things - like being less tired after you take part in a fitness test." Victor F. pointed out health benefits of losing weight: "You don't have high blood pressure. You aren't stuck in a wheelchair." Many teens mentioned that improvements in relationships were among the benefits. Katie S. said that before she lost weight, some of her peers had no regard for her feelings. She added, "It still amazes me how much emphasis is placed on being thin and how differently I'm treated now [that I've lost weight] - like all of my worth is in my looks and weight. This is absurd, but it's the way our society is." Last, but not least, the vast majority of teens reported that that their confidence and self-esteem had improved and that they had more energy.

How can a teen stay motivated?

Let's face it: when someone first loses weight, it's pretty exciting because everyone notices. People keep asking, "How'd you do it?" The compliments seem to never end. It's enough to keep anyone pumped…for a while. With time, however, maintaining weight loss can get somewhat boring as the "new you" becomes the "old you".

So I asked the teens what motivated them to keep the weight off. From what they told me, the number one way they stay motivated is that they keep a vivid picture - figurative, literal, or both - of what their lives were like when they were heavier, and they think about how they don't want to go back. Also, many teens stay pumped by using a very positive strategy: focusing on the "payback" for all their efforts. In fact, a good number of them use both strategies. For instance, looking at old photos and remembering how people made fun of him keeps Tom C. from gaining back weight. He also stays motivated "by how good I look in clothes, how good I feel, and how much better other kids treat me."

One way to start this process is by keeping a diary of small changes - in body, mind, and spirit - that take place on the way to a healthier weight. This should jump-start the process of recognizing "the payback" from developing a healthier lifestyle - even if you aren't yet where you ultimately want to be. When you feel discouraged or backslide, pull out the diary to remind yourself of the many positive changes that have already occurred.

What is a healthy way to lose weight?

To go from being overweight to a healthy weight, you need to eat fewer calories than you body uses each day or increase your physical activity so that you burn more calories than you eat. The vast majority of teens I interviewed said they did both. A big theme was giving up or cutting back on regular soda pop, and many teens said that drinking more water is one of their strategies. Other important things mentioned by the teens were cutting back on fat, downsizing portions, eating more fruits and vegetables, snacking smarter, shifting to healthier carbohydrates, making better restaurant choices, and learning how to manage emotions without turning to food. Most of them are not meal-skippers, and they don't deprive themselves of treats because deprivation may make you want to eat more in the long run.

Whenever I'm asked to pick one strategy that led to the success of these teens, without hesitation, I say exercise. In fact, becoming more physically active was the number one response when I asked the teens for their most important weight-loss strategies and for the most important things they do to keep the weight off. I was actually surprised to see how dedicated these teens are to exercise. Strength training and running were the most common forms of activity. Less than a quarter of them were involved in team sports, so kids don't have to become "jocks" to be fit.

How can parents support their teen?

Parents and teens in Weight Loss Confidential made it clear that the most important support usually comes from the family. Parents need to understand that nagging, preaching and generally getting on a teen's back about food and exercise just tend to backfire. It's up to the teen to decide if, when, and how (within reason, as long as it's a healthy way) to lose weight. Also, parents should be role models - that is, if they want their teen to eat healthy foods and exercise, then they need to try to do the same. Also, although it's important to have occasional favorite foods and treats, it's also important to have a healthy food environment at home. That means filling the cupboards and fridge with lots of healthy foods and getting rid of highly tempting, low-nutrition, high-calorie items. However, kids should be involved in the decision-making process about what foods are around because a democratic process works far better with teens than a "top-down" autocratic approach.

The information about the teenagers used in this weight loss for teens interview was adapted from Weight Loss Confidential: How Teens Lose Weight and Keep It Off - And What They Wish Parents Knew (Houghton Mifflin, 2007) and its companion, Weight Loss Confidential Journal: Week-by-Week Success Strategies for Teens from Teens (Houghton Mifflin, 2008) by Anne M. Fletcher, M.S., R.D.

The ads that accompany this article have nothing to do with this article and the products sold in them are not endorsed by Anne Fletcher. Any products suggesting quick weight loss are particularly inappropriate for teenagers, who should check with their physicians when considering weight loss.