Prom night is a custom where high school juniors and seniors dress in formal attire and participate in activities surrounding a dance. Prom activities vary across the United States, but most traditions involve dates, prom dresses, tuxedos, dinner and dancing.

The beginning of prom night usually kicks off with group photos. Teens, with and without dates, usually meet up in larger groups before dinner and prom. This is a chance for close friends to get pictures together and create a new memory. Look for a public place with a beautiful backdrop or get permission ahead to use a private location if you plan to take photos yourself. 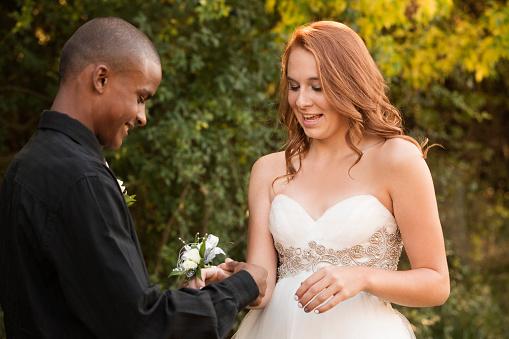 Pick a specific time for photos and make sure all your friends and their parents know the plan. Depending on the size of the group, allow at least a half-hour, and up to an hour, for pictures. This is usually the only time parents are involved in prom night activities.

Once dates and groups are gathered, parents usually take pictures. Try to get pictures of your child alone, with her date alone, and with the entire group of friends. Teens can try out different serious and silly poses. Parents and teens can share these photos on social media for other family members to see.

If your prom includes dinner, you'll head straight there after photos. This is more common if the prom is held at an event center or banquet hall. Dinner can take anywhere from one to two hours and may be a served meal you chose ahead of time, or a buffet.

If your prom doesn't include a sit-down dinner, many teens make dinner plans with their dates or a small group. The main options for prom dinner are:

Going to the Dance

Prom locations include school gymnasiums, local banquet halls and other event spaces. Parents need to know the name and address of the prom location in case of an emergency. However, this information is generally printed in a newsletter to parents, the tickets themselves and even on a school's website.

Prom is a dance and is usually the last dance of a senior's high school career. It is one last chance to get together as a class, have fun and celebrate their accomplishments. A typical prom is held on a Saturday evening for about two to four hours between 7 p.m. and 2 a.m.

Teachers and parent volunteers chaperone the event. If you're a parent who wants to chaperone, discuss it with your child first to make sure he is OK with your being there. This night is about students having fun with friends so make sure your presence won't interfere.

Prom court nominees are selected during the school day in the week or two before prom. Some schools don't do prom court because it is viewed as an unnecessary popularity contest. Other classes use it as a chance to show support for students with disabilities or who don't typically get a lot of attention. Only seniors can be nominated for king and queen, but sometimes juniors are also nominated for prince and princess.

Voting for prom court happens a few days before prom or at the actual event. Only teens get to vote, but teachers and administrators tally the votes and keep them secret until the announcement. During prom, chaperones announce and crown the winners in front of everyone. The elected king and queen usually share a dance together as well. If you're a parent and know your child is nominated, find out what time the announcement is. It is usually OK for parents to stop by prom solely for the announcement of prom court to take pictures. Make sure your teen knows you plan to come and respect any boundaries they set.

What to Do After Prom

For many teens, a prom is an all-night event. After dinner and dancing, teens look for other ways to keep the fun going and spend more time together before graduation. These after prom activities are planned by parents and teachers or groups of teens.

Some schools, parent organizations or community clubs host drug and alcohol-free after-prom parties, usually in the school building. These events start as soon as prom ends and feature organized activities, snacks and raffle drawings. Events are usually free. Teachers and parents volunteer to plan and chaperone, and the party can last until 8 a.m. Teens who attend are typically required to stay for the entire event, which can include a quiet area for those who are ready to get some sleep.

If your school doesn't offer an after-prom event, consider hosting one. Teens coordinate with their parents to plan activities and invite friends for an all-nighter free from drugs and alcohol.

Many parents will ask other parents to help take shifts for after prom parties so that there is an adult awake and supervising all night long.

Teens should work with parents.

Prom night can be a fun experience, but it can also cause stress for parents.

Some teens find ways to host unsupervised parties while parents are away. These parties typically involve word-of-mouth invites and are open to drinking and drug use. Parents should talk to teens about after prom plans and verify information. Signs your teen may plan to attend an unsupervised party include:

If you suspect your teen plans to attend one of these parties and you are not comfortable with it, insist on driving them and picking them up so you can know for sure where they are. 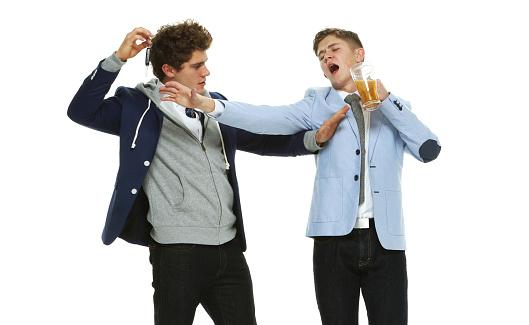 Teens can't legally purchase alcohol, but some find a way to get beer and liquor anyway. Prom is a great excuse for teens to drink together as one last party before they enter the tough world of adulthood. One of the negative effects of teen drinking is drunken driving. The top teen cause of death is car accidents, many of which occur because of impaired driving. According to statistics, about one-third of teen drunk-driving related deaths happen during prom season.

Teens who don't drink are also at risk if they ride in the car with a drunken driver. Consider the consequences before drinking and driving or getting into the car with a drunken driver, Chances are your parents would rather come pick you up at a party where you've been drinking than see you injured or dead from a drunk-driving accident. Parents can talk to teens about the dangers of alcohol and plans if their teen gets stuck in a bad situation.

In movies and TV shows you often see teens losing their virginity or expecting sexual experiences on prom night. In one survey of over 12,000 teens, results showed that only 14 percent of girls said they had sex on prom night. This real data seems to say that prom night sex is more of an urban legend rather than a popular activity. Your teen can talk to her date about sexual expectations before prom night and should feel comfortable expressing her preference to not engage at any point in the evening.

Parents can talk to teens about views on sex and other sexual activities before, on and after prom night. When you talk to your teen about sex remember to:

Prom Night Is a Rite of Passage

The prom experience is unique to each person and varies from school to school. Learn all you can about the times and locations of various prom night activities to be best prepared for the evening. The goal for teens is to have fun with friends while as a parent, your goal is to let them have fun and keep them safe.