If you live in the Maryland area and have always felt like you were destined to be a star but could use a little formal training, there are many different acting classes for teens in Maryland. These classes give you a chance to train with top-notch teachers and be among teens who share your penchant for the stage.

Acting Classes for Teens in Maryland

There are many different organizations that offer acting classes for teens in Maryland, ranging from summer programs, holiday programs, and individual classes. Some programs group teens together by grade, others by age.

Drama Kids International is located in four locations including East Montgomery County, Central Maryland, Potomac, and North Prince George County. They offer programs for teens in middle school and high school. Regardless of when a student registers, lessons will never be repeated and enrollment takes place year round. There are several programs offered depending on the student's particular interests.

Imagination Stage, based in Bethesda, is a theater arts organization designed to empower young people of all acting abilities and ranges. The organization offers both camps and classes so teens can help turn their Hollywood dreams into a reality with proper training.

Imagination Stage offers a variety of classes for teens of all acting levels to hone their skills and nail auditions. Classes are usually grouped by age so teens can be among their peers. Some examples include the following:

Imagination Stage offers spring break camps and summer camps, which are divided by grade. Some examples of camps include the following:

Maryland Hall is a diverse art program for kids, teens, and adults based out of Annapolis High School. They offer dance, theatre, drama and musical theatre programs during the Winter, Spring, and Fall. These programs help teens further their acting abilities and build their confidence and speech skills. Programs range in price point and scholarships are offered that allow students to take classes for free, or at a reduced rate.

Baltimore offers some great acting programs for teenagers. From musical theatre to improv classes, Baltimore is booming with wonderful options. 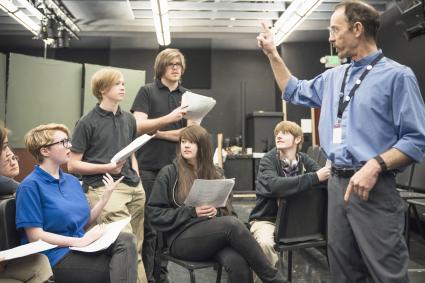 Everyman Theatre is a non-profit organization located on West Fayatte Street in Baltimore. They offer a variety of programs for children, teenagers, and adults.

Charm City Players is located in The Mercy High School on Northern Parkway. They offer programs for children and teens ranging from eight to 16 years old. These programs take place three times a week at an hour per session. These classes focus on acting, dance, and voice development.

If you live in Maryland and have dreams of making it big in Hollywood, it's easy to get a little more training and experience. These acting classes for teens in Maryland can help you hone your acting skills or introduce you to the world of acting if you're just starting out.