In this dealing with a bully interview, Dr. Ben Leichtling shares his knowledge of what it means to be bullied and how to stop being a victim. He is a speaker, coach, consultant and author of How to Stop Bullies in Their Tracks, Parenting Bully Proof Kids, Bullies Below the Radar, and Eliminate the High Cost of Low Attitudes.

Dealing with a Bully Interview with Dr. Ben Leichtling

LoveToKnow (LTK): How does a teenager know he/she is a victim of bullying?

1. Overt, physical bullying. This type of bullying is the easiest to recognize.

2. Stealthy, covert mental and emotional bullying. Stealth bullies use sneaky, manipulative, controlling, backstabbing, nasty put-downs. With a smile or an innuendo, they spread rumors and form cliques. This type of bullying is usually harder to recognize because it flies below most people's "bullying radar." Since it is harder to get evidence for, it's also more difficult to stop than overt bullying.

3. Professional Victims. They use their hypersensitivity and hurt feelings to manipulate and control their environment. They win when everyone else is walking on eggshells to avoid the control-freak blowing up or withdrawing into silence. It's never the bully's fault; it's always your fault. You're responsible for all the communication errors, for all attempts to reach out and you also have to make all the amends. Your job is to do everything the bully wants in order to please him or her but he or she is never satisfied.

4. Internet or cyberbullying. This type of bullying is becoming more prevalent in the teen-social networking world. Since it's done at a distance, many otherwise nice teens smell blood and pile on.

5. Self-Bullying. Those internal voices that put you down relentlessly and predict failure in love, sports and careers. Those little voices that say, "You're fat, you're dumb, you're ugly, no one will ever be your friend or love you, you're a loser, and you'll never succeed." This type of bullying is the most difficult to overcome because people carry it inside themselves, especially when they're teens.

LTK: What are some of the effects bullying has on teenagers?

BL: The effects of repeated bullying, harassment and abuse are usually devastating. In addition to physical harm, teens usually feel increased anxiety, stress, negative self-talk, self-doubt and depression, as well as loss of confidence and self-esteem. Victims lose their appetite, experience sleep disturbances, have paranoid thoughts, stop going to school, and give up on studies and athletics. They tend to withdraw and isolate themselves from other students and family. Helplessness, hopelessness and self-loathing can lead to somatic problems such as colitis and ulcers, self-inflicted wounding and cutting, and eventually suicide.

How to Stop the Bully

LTK: What is the first step in dealing with a bully?

BL: There are both internal and external critical first steps. Internally, you must rally yourself. Strengthen your spirit, will and determination against adversity. You may be a target but you are not a victim. Never be defeated and don't let anything crush your spirit. Being a target is not your fault; bullies are jerks.

Externally, most teens don't go to their parents, they try to solve the problem themselves. Typically, they try peaceful methods like ignoring the bullying, trying to "rise above," asking the tormenter to stop, trying to solve misunderstandings reasonably, trying to make friends and even begging with bribery and appeasement. I call these "The Golden Rule" tactics. If these methods are effective then you weren't dealing with a relentless bully. You were dealing with a good kid who was having a bad day and kicking the dog (you). Imagine a staircase, as you ascend each level in stopping a bully, your level of firmness must increase. If tactics at the lowest levels don't stop a bully, then you'll have to move up a level in your responses. The bully will show you how firm or clever you have to be.

Always remember, if the bullying continues, you probably aren't doing anything to deserve it (it's not your fault), but if you don't respond strongly it'll only get worse. Real bullies interpret acts of kindness and conciliation as weakness, passivity and an invitation to be more aggressive.

The Golden Rule does not stop real-world bullies. Real bullies are dedicated predators who start preying on teens they think are weak or isolated. Only strong, firm, and tactically clever actions stop bullies. All bullies have reasons and excuses for bullying. Bullies attack whatever is different about their targets, but those differences are not the reason bullies attack. Bullies are predators; bullies are hyenas; bullies attack unless they're stopped.

LTK: What shouldn't a teen do when dealing with a bully?

BL: Don't go to the bully's parents unless you've known them all your life. Most parents of bullies will think their little darlings would never bully or they'll think that bullying is fine.

LTK: How does a teen deal with a bully who threatens physical harm?

BL: Get your parents, the school principal and the police involved. Tell them about the bully's last threat and make sure they have a written record of your complaint. Notice how the principals and district supervisors in schools where there have been suicides plead that they didn't know.

Give the principal one chance to stop the bully. If the abuse by the bully or his/her friends continues, your parents need to get a lawyer and bring media coverage to the situation. Make sure your parents act swiftly if the bullying doesn't stop or the bully does things to you "accidently." Rarely is bullying an isolated episode. When the responsible adults don't stop bullying swiftly, bullies know they're safe and they form gangs or cliques of terrorists. Your parents can find other parents of targeted teens and bring united pressure. 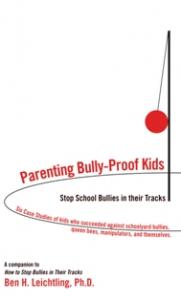 LTK: How can a teen avoid becoming a future victim of bullying?

By acting strongly now, you will learn to defend yourself, find other strong friends and allies, and responsible authorities. Bullies will sense your inner strength and skill and they'll go looking for easier prey.

Additional Help in Dealing with Bullies

Purchase all the books and CDs on my website. Priority shipping carries no additional cost if you order multiple books or CDs. I do consulting for schools and coach teens and their parents on how to stay strong, courageous, healthy and skillful with an individualized action plan, which includes the parents' and teen's values and capabilities in dealing with a bully.

LoveToKnow would like to thank Dr. Ben Leitchling for taking the time to share his knowledge in this dealing with a bully interview.