Your underage and can't vote for your favorite candidates. It might seem like you don't have any choices about politics until you turn 18, but there are a lot of ways to get involved in school, local, regional and national politics.

Getting Involved in School Politics

If your school is doing something that you don't like, make a change. Getting involved in the politics of your school can help you with communication, leadership and teamwork skills. Plus, it'll look great on college apps.

If you're just getting into politics and want to understand the mechanics, it can be helpful to work for a classmate that is campaigning for a class officer or student council position. You might volunteer to create posters, hand out flyers, help them with their speech, etc. This will give you firsthand experience with the campaign process.

Start or Join a Political Club

Newbies can also join a club or start one of their own if your school doesn't have one. Republican, Democratic and Independent clubs will introduce you to political events, political debate and rallies. You might also start a political school magazine club that analyzes local, state and national government officials, discusses bills and keeps up with local political news. Feminist, climate and pride clubs are great political clubs to get involved in as well.

Rather than taking a submissive role in politics, dive right in by becoming a class officer. Become student council member or representative by becoming president, vice president, secretary or treasurer for your class. You'll learn about council meetings, representative acts, how to work with school officials and manage funds. This will give you first hand leadership and professional experience for your future political endeavors.

Helping at the Local and Regional Level

Your political prowess doesn't end at school. Even if you aren't the golden age of 18, you can help out your local representatives too.

Local officials need volunteers to help them pass out flyers, get signatures and set up meet and greets. Whether they are campaigning or just trying to get community members to agree with the new mileage, local officials need your help. This can include anyone from your community council members to your local board of education. Look for local government internships in your area as well. You can't go wrong with volunteering. 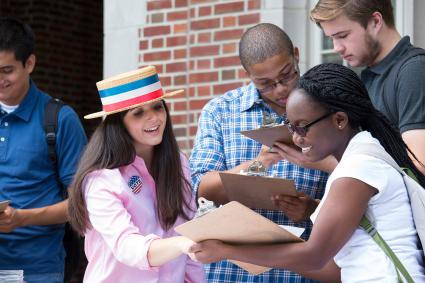 When local candidates are trying to get elected, they need your help. Show up and support their events, attend local meetings where they might be speaking and show your support with signage. You can even get other students around you excited about candidates by sharing their mission or talking about them in clubs.

This is a great way to keep you updated about issues in your area and see the political process in action. This can also give you the chance to talk to local leaders about an issue that is important. For example, you might be able to discuss a recycling plan for your area or learn about that new playground building project.

Getting involved at the state level can be a little harder but isn't impossible. There are still ways that you can contact, support and talk about state issues.

If there is an issue that you would like to talk about or just have a suggestion, contact your state official. These professionals are there to hear you. You might choose to call your local office or send an email. And if it's important, don't stop. Make sure that your voice is heard. Learn who your senators and governors are and where they stand on the issues.

Do you have some writing skills? Write about political issues you're interested in. Get the information out there about issues in your state that need to be known. Make sure to share your opinion on social media so your voice can be heard.

Get a group of your friends in the debate club and go to your state debate. Attend their rallies to show your support. This is a great way to begin to understand where your state legislators and representatives stand on the issues.

Getting Involved on a National Level

Getting involved doesn't stop at the state level. Everyone knows the presidential campaign is a big deal, but in addition to national candidates, there are bills, proposals, congress, judges and other political issues that all make a difference in your life.

To make a national contribution, you can choose to join a national organization like Young America's Foundation or Junior State of America Foundation. These foundations can get you rolling on political happenings in your area. You can learn about volunteer opportunities, along with programs and activities.

If there is something that you don't agree with on the national level, make your voice heard. Create a Facebook event or advertise it on Snapchat and stage a protest. You might even join a protest in your area. Don't take it lying down, instead stage a sit in.

The Importance of Getting Involved

Voting is important. But for a lot of teens this isn't a choice since they don't meet the age requirement. However, there are a lot of ways that you can get involved in politics at all the different levels if you just look. Start with the government at your local school and see where that takes you.

1
Comments
© 2006-2020 LoveToKnow, Corp., except where otherwise noted. All Rights Reserved.
Resources, Advice & Tips for Covid-19
Read More
How to Get Involved in Politics for Teens