In general, teenagers require more sleep than adults do because of their changing hormones. These hormones directly impact teenager's circadian rhythm, otherwise known as your internal clock. The need for more sleep changes when children go into puberty, with a typical teen needing about nine hours of solid snooze time.

Currently, nearly 75 percent of teens in the United States are not getting the appropriate amount of sleep and it's partly due to their schedules.

The typical school schedule works against adolescent's shifting circadian rhythm making day to day functioning more difficult for an exhausted teen. Once puberty hits, melatonin goes from being released around nine or 10 in the evening, to being released closer to one in the morning, making going to bed earlier nearly impossible.

Because of their shifting circadian rhythm waking up early for school and not being able to fall asleep early enough in the evening can cause fatigue. This can create a snowball effect as teens attempt to catch up on sleep on the weekends, making waking up early for school that much more challenging. When you add in extracurricular activities, as well as the potential pressure of applying to colleges or jobs, adolescents desperately need sleep that they aren't getting. Because of this, many schools are now considering or have implemented later start schedules.

During puberty teens experience a burst of emotional and physical growth. Similar to when babies go through growth spurts, teens also require extra sleep to help their bodies do all that growing and maturing.

During adolescents children are beginning to separate from their parents and form their own independent identities. This reorganization takes place in the brain as teenagers learn about agency, responsibility and self identity. This huge identity shift takes a large amount of energy and requires proper nutrition and large amounts of high quality sleep to achieve.

Lack of Sleep and Quality of Life

Sleep deprivation can impact overall mood, academic performance, and general quality of life. In a study, teens who had a set bedtime of 10 p.m. or earlier showed less symptoms of depression compared to their counterparts who had bedtimes at midnight. This means that sleep has a huge impact on adolescent's brain growth and development, as well as provides a protective factor when it comes to certain mental health symptoms. Having good sleep hygiene is especially important if depression, or other mental health issues run in your family.

Adult sleeping habits tend to show up towards the end of the teenage years with 18 to 25-year-olds needing seven to nine hours of sleep per night. With teens it can vary a bit, with 13-year-olds needing around nine to 11 hours and 14 to 17-year-olds needing around eight to 10 hours of sleep per night. Keep in mind that there is no normal, so take note of how long you need to sleep to feel refreshed and well rested. This means that when you wake up you feel alert and mentally sharp. If you're waking up feeling groggy and out of sorts, you could probably use more sleep.

When to Speak With a Professional 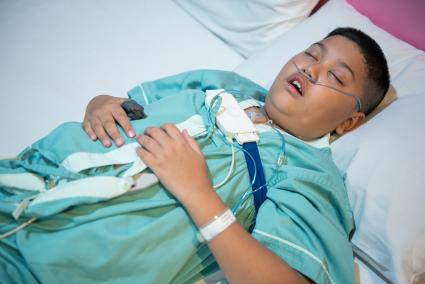 If you are experiencing excessive fatigue despite getting the appropriate amount of sleep or you feel like you aren't getting restorative sleep, you should speak to your doctor.

Other issues such as depression, anxiety, narcolepsy, sleep apnea, and insomnia can also be negatively impacting your quality of sleep. Some symptoms include feeling very low energy, feeling sad, having racing thoughts, feeling exhausted, and having difficulty falling and staying asleep. Teenagers who sleep too much (over the average recommended nine hours on a regular basis) who are still experiencing fatigue may also need to speak with a doctor or therapist.

Get the Best Treatment

You may be referred to a therapist, sleep specialist, sleep clinic, or psychiatrist to help you get the best sleep possible. Be sure to let them know if you are taking any prescribed or over-the-counter medication. You should also note how much caffeine you drink as well as your usual sleep routine so they can provide the best treatment possible for your particular needs.

Keep in mind that beginning a new, more structured nighttime routine takes a few weeks to get used to. Expect this shift to take some time before it forms a solid habit and is easily done on auto-pilot. Even though it may be difficult at first, try to stick with it as best as you can. In addition to speaking with a professional, you can improve your sleep hygiene by:

Puberty presents a difficult challenge for teens and their parents. School schedules work against adolescent's puberty induced circadian rhythm shift making falling asleep on the early side much more difficult. This can lead to teens being severely overtired and wanting to catch up on sleep, which usually exacerbates the problem come Monday morning. Staying on a regular sleep schedule and limiting screen time in the evening hours can set teens up for healthy sleep hygiene as adults. Always speak with a professional if you aren't happy with your sleep quality, or notice a shift in your ability to fall asleep soundly at night.

1
Comments
© 2006-2020 LoveToKnow, Corp., except where otherwise noted. All Rights Reserved.
Resources, Advice & Tips for Covid-19
Read More
Why Do Teenagers Sleep so Much?